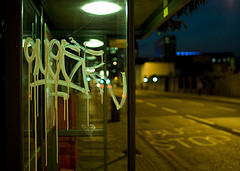 Whatever the potential moral objections behind such an initiative, mapping London's gang allegiances is an impressive feat. It's a rare person, we suspect, who intimately understands the shifting rivalries of London's estates, yet has the tech wherewithal to map and publish it. But this is just what the Gangs Of London web site has accomplished.

The site has information covering the whole of London, plotting gang territories on top of social deprivation data. Apparently, Wandsworth and Merton have fewest gangs because of less deprivation - news to Lord Kennilworth, who was held up at gunpoint in his Battersea driveway.

The archive of gang graffiti shows just how obsessed members are with their postcodes. There's even a historical section tracing gangs back to the turn of the 20th Century. The Telegraph have interviewed the creators of this compelling if disturbing resource.