HS2 Has Terminal Consequences Around Euston 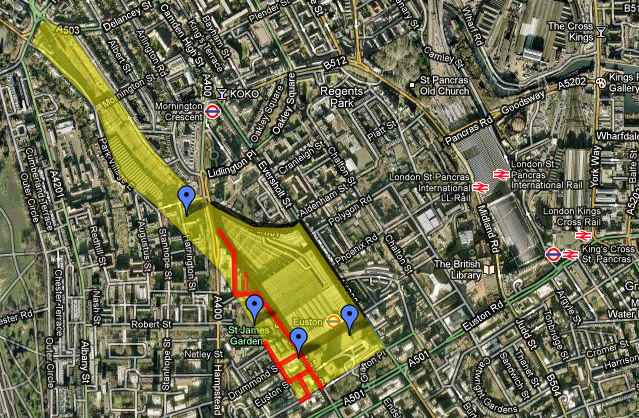 View the complete Mega Euston mapAs we remember saying, on the subject of where to fit a eight platform 400 meter long railway station in NW1, "the practical options are going to involve a trade-off between cost and what you can demolish with the minimum of fuss. We look forward to seeing their conclusion in March."Well, it is March, and all has been revealed by Secretary of State for Train Geeks, Lord Adonis, and as we reported yesterday the 'winner' is good old Euston.HS2 Ltd's proposals are out and the promise of a 50 minute trip to Birmingham (and, more importantly, a 50 minute trip back to town) moves one step closer. The consultants at Arup have had their OS maps out and they've drawn a thick, futuristic, red line across the country - ending at a neglected car park in Birmingham and starting in the Cafe-Bar of the Ibis London Euston (though for standard class passengers you'll likely be nearer the cigarette machine in the reception of the Thistle London Euston, 400 meters up the road).Euston will grow and become a 24 platform mega station (having settled on ten platforms for HS2), spreading out of it's current site to the south and west. So farewell ugly Network Rail buildings, The Ibis, St James' Gardens, the Cottage Hotel, The Bree Louise Pub and most of Cardington Street (you can take our tour round the condemned streets on Google Maps above). Us transport geeks will face the sad loss of an original, if disused, Leslie Green Station Building on Drummond Street, there are also a fair few houses on the site and around 200 flats will go in the Regents Park Estate to widen the approach tracks. If you do get one of these leaftlets through your door, our condolences.The report itself is packed with geeky goodness. We have learned that they did consider burying a station in Regents Park, they still hold Kings Cross Railway lands as a backup site and there's all sorts of Heathrow Terminal 6 and Crossrail information buried in the sizable PDFs, if that's your sort of thing...Most interesting (we think) are:A) The suggestion to divert London Midland Trains from Milton Keynes onto Crossrail, potentially solving Crossrail's little problem with not having enough customers west of London - a last laugh for superlink?B) The rather brilliant idea of having a Clapham Junction like interchange in Old Oak Common (a rail depot, not a leafy open space) that will take passengers straight onto Crossrail (for Central London, Docklands, Essex, Kent, Heathrow) and and provide interchange with the Great Western Lines (for the West Country, Cotswolds and Wales). Anyone who has ever had a 'Via London Terminals' ticket from the South West to the North understands why this is a good thing.C) The rebuild of Euston Underground to finally link the two bits together.D) The suggestion that Crossrail 2 would be needed to relieve the Victoria line from all the new awestruck arrivals from Birmingham, but the omission of any passive provision for Crossrail 3 (a dream to link Euston and Waterloo).E) No connection to HS1 - so no Paris to Birmingham Midlandstar for now.F) Absolutely no mention of rebuilding the Euston Arch! (Correction; Pararagraph 3.2.2.2 states that the proposal to rebuild the Arch would be compatible with the prefered scheme).Reading these detail packed pages you can almost imagine yourself in 2027 - standing in the great hall of a new Euston; a web of shiny, air-conditioned, carbon neutral, step-free transport connections reaching out in every direction...Alas, this report may join the sizable pile of similar documents in the National Archive's basement, as the vital consensus on High Speed 2 from all parties has failed to emerge. Labour wants a first step to Birmingham linked to the existing West Coast Mainline for services north. The Conservative's policy calls for an 'Inverse S' serving Scotland and the North East via a two runway Heathrow, Birmingham and Leeds.With a timetable stretching out into the 2030s this project is going to need an agreement between Labour and the Conservatives, who welcomed the plans by calling them "a betrayal", "lacking in ambition" and unable to grasp "basic truths". Strong basis for consensus then...Nevertheless, all parties agree with a London to Birmingham line being part of the HS2 - how about we just get on with this and then argue about the rest in 2027?