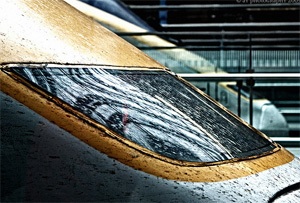 Image by TurnipFarmer from the Londonist Flickr pool
Lord Adonis announced the government's proposals for a new High Speed rail link between London and the North this morning; a £30bn project that would bring Birmingham, Manchester and Yorkshire within less than 90 minutes of the capital in a Y-shaped network, splitting at Birmingham.

There's an interchange with Crossrail near Heathrow planned, allowing travellers easy access to the airport and nearly halving the current journey time between, say, Leeds and Canary Wharf. The other big implication for London is a wholescale rebuilding of Euston: 10 high speed platforms and 14 'normal' platforms all below ground level will involve expansion west and south - which answers our question of where to find 6 spare acres - all of which would hopefully be achieved without having to open a temporary station (à la St Pancras) or long closures.

We're so bloody excited about this we hate to mention that none of it's set in stone yet. The London to Birmingham route won't get the go ahead (if consultation goes well) until next year, and work won't even start until after Crossrail's finished. Still: meet you at the Bull Ring in 2026, eh?