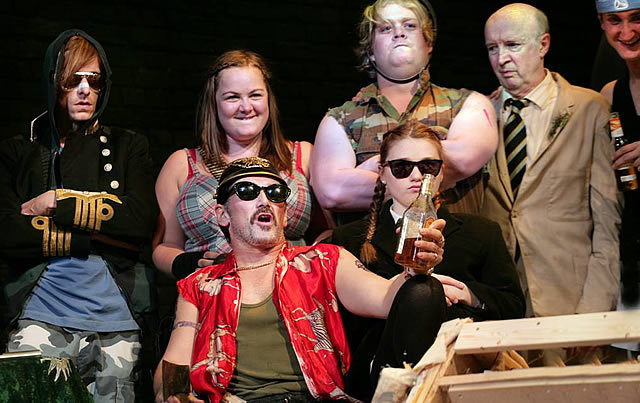 Here's what you probably know already:

And here are a few things you might not know:

In short: we were utterly blown away this production.

Jerusalem is a mess of incredible juxtapositions; ugly beauty, slow energy, the compelling anti-hero loner and his pitch-perfect ensemble of acolytes, violence and innocence, badger poo and May queens, tradition and irreverence (like Gerard Horan's pub-running Morris Dancer, after a bit of coke to get him through the busy evening). There's so much going on, it's almost impossible to describe just. how. good. it. is.

So, we'll leave you two other opinions. One friend, who rarely goes to the theatre, immediately said he wanted to go more often if it was always this good. The other, who watches two or three shows a week says it was the best play she saw in the whole of 2009. We'll go one further: we think Jerusalem, and Mark Rylance's performance in particular, might be one of the best things you'll *ever* see in the West End.

Jerusalem is currently booking at the Apollo Theatre until 24 April. Tickets from £30.