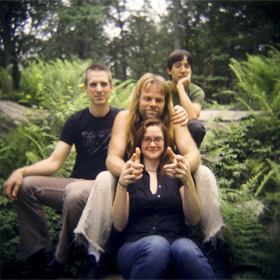 Writing songs about sex, drugs and rock n roll is so last century. At least that’s the impression you get from Austin’s Shearwater. Named after a species of seabird their songs explore the fragility and the beauty of the natural world. They’re not just tapping into the green zeitgeist., however, singer Jonathan Meiburg is a graduate of ornithology and has spent years researching endangered species.

There aren’t many bands who are writing songs about the environment and it gives Shearwater a quirky and intense edge. Recent album The Golden Archipelago is a concept album about life on islands and documents Meiburg’s travels to the Falklands and Madagascar.

The songs translate well in a live setting. The breadth of dynamics and the range of instrumentation create a lush density that compliments the natural landscapes described in the lyrics. Leviathan Bound is a grand opus that describes an air-raid attack on a natural habitat whilst Hidden Lakes laments the rising sea levels with an icy and spooky sound. The band are all multi-instrumentalists, swapping them throughout and you sense that they take their songs and the subject matter very seriously.

The intensity of the songs is mainly due to Meiburg’s rich vocal range, which on Century Eyes is full of guttural anger over the affect of war on the natural world to the haunting Snow Leopard where his voice almost whispers next to the xylophone accompaniment. The band say little but the sense of respect and admiration from the crowd is obvious. The set ends with crowd favourite Rook, a driving and melodic recent single and Meridian, a full-on assault of crashing drums and walls of feedback.

Having begun life as a side-project, Shearwater are now on their third album. Start tapping that carbon foot(print).