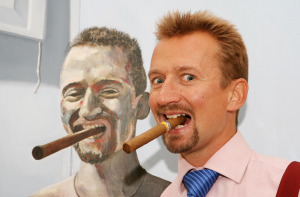 Sitting crossed legs on his couch, T-shirt and jeans outfit, tanned and relaxed after a two-weeks holiday in the Philippines, he doesn't retain much of what he was a few years ago: a 'square mile' creature. A Cityboy.

Geraint Anderson, former utility analyst, is today the portrait of happiness. For twelve years, he worked in the biggest financial district in Europe, latterly reporting on the dark side of the City in an anonymous column in the now defunct thelondonpaper. 'Cityboy', the novel, followed shortly after.

Today Anderson is a part-time writer, a part-time journalist and a part-time backpacker. "If I am not extravagant, I can live for 20 more years with the money saved during my career in finance," he reckons.

He still finds time to comment on the City, and the ongoing fallout from the recent financial crisis. One of the reasons he started his column was because he was worried about what was going in the banks before the crisis. "I am a Christian, left wing and hippy and I needed a confessional," he says.

"The fear was that the 'party' would be over, and this fuelled short term thinking. I saw more and more criminal behaviour such as spreading false rumours to enhance the performance of your portfolio, market manipulation, tax avoidance and much more," he explains. "It is partly the fault of the rise of the hedge funds, short term guys that can make huge amounts of money. Since 2000, people wanted absolute returns. This means to make money even when the market goes down."

This led to the credit crunch as we know it. But how is the City in the aftermath?

"The bonus culture that partly caused all of it is still there but in a lighter version," he believes. "The situation has changed. People are more professional. They want their back to be whiter than white."

A few days ago, Lloyds chief executive Eric Daniels announced for the second year in a row the decision to waive his £2.3 million bonus. John Varley, chief executive of Barclays and Bob Diamond, its president, also decided to turn down their awards. Stephen Hester, Chief Executive of Royal Bank of Scotland followed suit, stating that he will waive its £1.6 million bonus.

In the City some things have changed. Some thing have not.

"Greed is a constant and what is truly amazing is that the profits that the biggest banks have made in the last months are a direct product of the crisis they have caused," Anderson says.

"Governments are issuing a lot of bonds to bail out banks and interests are down to zero. Banks need to issue equity to do financial restructuring. It is an amazing scenario in which the institutions are profiting from their disgrace."

The 'buzz' of the City hasn't changed either. "Alarm at 5am, in the office by 7. Lunch in a Michelin star restaurant and then back to the desk again," Cityboy recalls. Lunch is often served at the 'Coq d'Argent' or at '1 Lombard street' and for a night out the places to go where 'Stringfellows' or 'Abacus'.

"Sometimes I miss it. I miss the boys' cameraderie and the routine that was pulling me out of bed every morning to become richer," he says.

Now Anderson has different reasons to wake up.

"I am trying to build a school in Kenya and I am involved in several charity projects," he says. "I also try not to spend my winter in London." Which means that the former Cityboy is packing again.