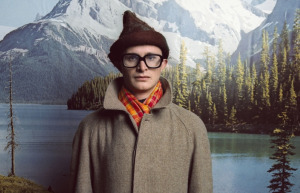 Simon Munnery is probably best known for his characters Alan Parker (Urban Warrior), a shouty wannabe-revolutionary, and The League Against Tedium, all mannered bon mots and studied superiority (as seen in Attention Scum!, shown late at night and criminally never repeated). You think Simon Munnery and you think: surreal, defiantly unmainstream, wearing a silly hat and possibly wielding a video camera in a sword. So it came as quite a surprise to find him doing straight stand-up about living in the country and raising his kids.

Yes, he really is doing material about the awkwardness of deciding when to acknowledge someone walking towards you down a half-mile track and chuckling to himself as he describes the odd things his young daughters do. At first glance it's like he's cribbing from the notes of any observational comedian - it's not that it's not funny, because it is - but then you look a little deeper and you realise that on a technical level, all Munnery's acts were the same kind of set-up and punchline jokes that Jimmy Carr does, but dressed up in other personas, a bit avant garde and less obviously about wanking. The surprise is that he's lost the props and doing it as himself. And that it's surprising isn't his fault, it's ours.

Shorn of the characters, Munnery turns out to be quite a disarmingly pleasant chap. He's not gone soft though - his gags are still fiercely intelligent and have bite - and while he breaks off to perform a poem about London, that's about as experimental as it gets. Is this a disappointment? Should it be? When someone can do 'normal' stand-up as good as this, of course not.

The N20 Festival at Battersea Arts Centre is now over, but find out where you can see Simon Munnery next.