A Massively Meaty Breakfast Visit from the Virtual Farmers Market 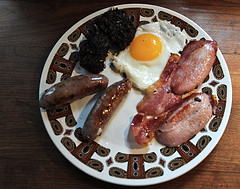 Marcus Carter, cofounder of the Virtual Farmer's Market, kindly dropped by Londonist HQ on Friday to deliver a complementary sample of his online shopping “hub's” latest offering: the Saturday Breakfast Box. Featuring a meat fest melange of yummy morning favourites assembled by Sillfield Farm's Peter Gott, the Saturday Breakfast Box is available for Friday delivery in two sizes: one that is suggested for two (but we reckon could feed four folks easily) and another for six people.

We gave the box for two a couple of test munches. With eight rashers of Cumberland back bacon, six traditional pork sausages, two massive slices of Sillfield Farm's signature black pudding and a bottle of tangy Oxford Sauce, it weighed in heavily at an affordable £13.50 (plus delivery charge). Really, the box (along with some eggs and bread purchased at our local supermarket) was entirely too much food for two  even split over Saturday and Sunday morning. Having all that tasty animal protein around for the weekend was kinda nice. It meant from late morning onward we (one Londonista and one dining companion) were full and, except for a bit of snacking, had no need for another meal. Honestly, we were already fans of Sillfield Farm's products, and were especially pleased to receive the bacon.

The box for six (£29.95 plus delivery) offers eight Cumberland back bacon rashers, eight streaky bacon rashers, wild boar pate, a 400g long coil of Cumberland sausage, six traditional pork sausages and a bottle of Oxford Sauce. Whoa. Based upon our experience with the box for two, we can only imagine that, with minimal augmenting, this option could provide up to twelve gluttons with the makings of an a.m. feast.

Besides the whopping amounts of breakfast meats, the Virtual Farmers Market sells a wide range of products made by independent food manufacturers. The site's fairly straightforward, and a quick browse of the “Here are Our Producers” page yields considerable yet concise info about an impressive group of indie and homespun businesses, representing the breadth of who and what one can expect to see at one of London's food markets.

On one hand, having market fare delivered meant we missed out on the bustling atmo of visiting a market such as Borough: the smells, the at hand producers sharing their wares with appreciative smiles, the see-it-and-squeeze-it aspect of purchasing fresh produce. However, on that ever present other hand, it sure was nice not having to navigate a sea of tourists and gawking foodies simply to take home some quality brekkie treats. As mentioned, we were already happily aware of Sillfield Farm, which meant there was really no need to actually visit them. Virtual Farmers Market's reasonable priced delivery service makes accessing some of London and the UK's best foods much more convenient.