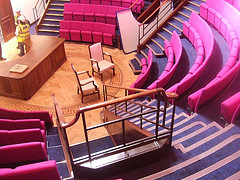 Baroness Susan Greenfield, controversial Director of the Royal Institution, has been made redundant. The much-cherished venue for science communication, on Albemarle Street, Mayfair, reportedly made the decision as a cost-cutting measure. The Baroness is now pursuing an industrial tribunal on the grounds of sex discrimination.

Under Greenfield's tenure, the RI initiated a £20 million renovation, installing a restaurant, bar and museum space. However, the institution now finds itself in dire financial straits after failing to attract the footfall such facilities require (for possible reasons why, see this Londonista's rants elsewhere).

As anyone who knows the Institution will tell you, it is an absolute national treasure that we cannot afford to lose. A staggering ten chemical elements were discovered within its walls. Fourteen Nobel Prizes were earned here. And the educational and public events programmes are second to none. As Colin Blakemore argues, the Royal Institution is a symbolic beacon of rationality in an increasingly irrational world.

Perhaps there is a silver lining. The press attention and fallout might bring awareness of the Royal Institution to the wider audience it deserves, albeit for the wrong reasons. If you only follow one link today, take a look through the RI's programme and get yourself to one of the events, which are always outstanding.