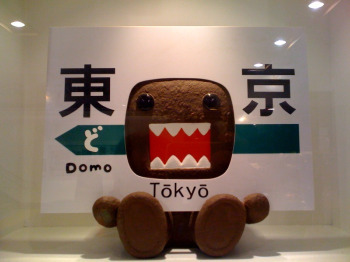 Image of Domo-kun by shibuya246 under a Creative Commons licence
If you went to the Matsuri festival at Spitalfields last September but couldn't move, you might want to try what's likely to be the more genteel surroundings of the Queen Elizabeth II Conference Centre on 30th and 31st January for Tokyo Day (even though you've probably spotted it's actually two days).

There's demonstrations of ancient arts, from Kendo to silk painting and woodblock printing, and more modern pursuits, including a sushi chef doing his thing and the chance to try your hand at calligraphy and origami. There's even the opportunity to pretend to be a Harajuku teenager in the Cosplay corner.

But what'll probably appeal to most people is the free anime screening room, including episodes of Fairy Princess Minky Momo 1st, Machine Robo - Revenge of Cronos and Astro Boy. There's also a toy section for you to rummage through your favourite Sanrio characters and get addicted to Mugen Pop Pop, or practice your taiko drum skills.