George Galloway Kicked Out Of Egypt 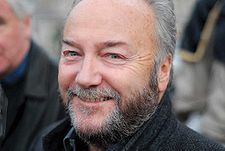 Photo / David Hunt
Voters in Bethnal Green & Bow who blithely assume that their elected representative is busy manning the gritting truck and taking care of other constituency business may be surprised to learn that he's been on a trip to the Middle East for a far worthier cause: bringing aid to the Palestinians.

He'll be back soon enough though — the garrulous Galloway was this morning deported from Egypt, where he had been with Viva Palestina, a humanitarian group that departed London in December en route to Gaza with a fleet of 200 aid trucks, a smattering of good intentions, and a heavy chunk of ill-informed viewpoints.

When some of the group were arrested earlier this week at the Rafah border crossing, Galloway enlisted the help of Turkish MPs to get them released, but the moment his feet stepped back on to Egyptian soil, the hirsute MP and fellow Respect crony Ron McKay were frog-marched into the back of a truck, driven out to the airport, and bunged on a Blighty-bound jet.

He'll touch down today at Heathrow, where unconfirmed reports suggest that Endemol have hired a limo to whisk him out to the Celebrity Big Brother studio for an encore of his 2006 scene-stealing performance.