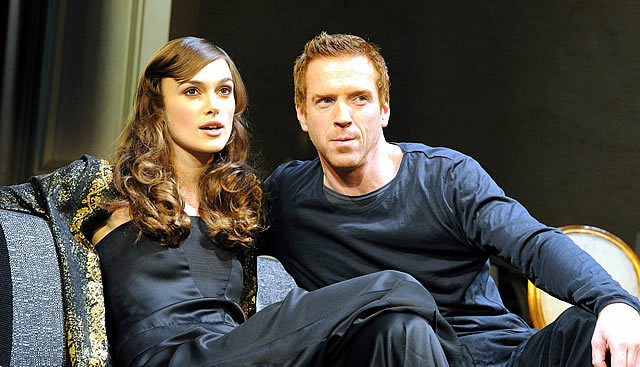 The first thing that'll strike you about this play
Is that Martin Crimp's script rhymes, like in Molière's day.
When Alceste the Misanthrope (Damian Lewis) delivers his lines with a snarl,
It sometimes feels like you're listening to Roald Dahl.
(We rather liked it; it's funny and quirky and easy on the ear,
And actually grates far less on stage than it's going to here.)
Alceste's a modern playwright who hates "celebrity" and fame
Which makes his love for film-star Jennifer (Keira Knightley) a confusing game.
She's young, famous and hot, and has friends who like to fawn
On this new American star, whose films are like porn.
She hangs out in a hotel room with her sycophantic friends,
When their backs are turned, she'll happily bitch and offend.
But Alceste's increasing jealousy brings this situation to an end.
So, Molière's been modernised with a supporting cast
Whose comic skill playing "unlikeables" is a real blast.
We love Kelly Price and the ever-great Dominic Rowan,
Chuk Iwuji and Damian Lewis are great, as is Tim McMullan.
But the person, for us, who really deserves props
Is Tara FitzGerald; as the awful, ugly drama teacher, Marcia, she's tops.
Happily, this production understands irony in spades,
Referencing playwrights, critics, ticket prices and the modern day.
Things that'll make the average theatregoer laugh
But we couldn't help wonder if it were too clever by half
For those in the audience for whom English isn't their first language
(Which we think might've been a significant percentage).
Yes, The Misanthrope's catching the tourist pound,
Perhaps the reason, after some jokes, you don't hear a sound.
(A note about costumes: in last night's chill there were lots of nipples protracting
The flimsy fabric on Keira, Tara *and* Damien is somewhat distracting...)
And what of Miss Knightley? Well, she's terribly thin
(She made us want to watch the show with our stomachs pulled in.)
Her accent's spot-on, but she falls into the trap
Of film-stars on stage who need to learn to RE-act.
She's great when speaking her lines, all snide giggles and grace,
But she forgets when she's silent, we can still see her face.
And playing a young, self-centred film-star is hardly a stretch
We're fairly sure this role ain't going to fetch
Awards; but if you're an adoring Keira fan
You really should fork out for tickets while you can.

The Misanthrope is playing at The Comedy Theatre until 13 March 2010. Tickets from £20 (for a pretty poor view way up in the balcony), up to an eye-watering £65 for premium seats in the stalls. Or show up at 10.30am on the day for £10 tickets from the Box Office. Visit www.themisanthropelondon.com for more information.