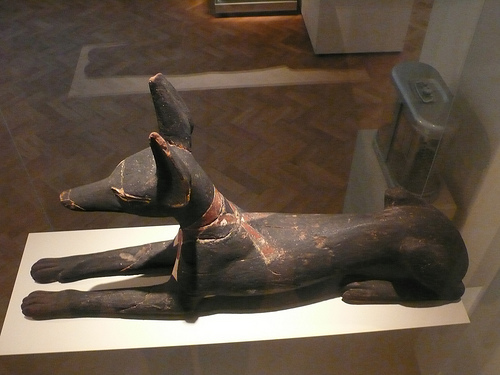 Uxbridge is a large suburban town in northwest London. In 2009 it happened to be the prowling ground of a very unusual creature...or possibly something very normal. Like most beastly headlines, the Uxbridge Gazette's (28th May) eye-catching 'Mystery monster spotted in Ruislip' certainly seemed dramatic, but was this just another case of too-many eye-witnesses seeing something that wasn't there ?

Step forward Maggie Daly who claimed that on May 17th she'd seen something similar to an African Hunting Dog in the vicinity of Chichester Avenue. Karen Lewis then contacted the paper to say that in 2008 her son had seen a similar beast on the Hayes bypass. It was huge, skinny and mangy.

On June 9th the Gazette ran more reports of the marauder although with every sighting it sounded more and more like a rather diseased fox was on the rampage, but as we know, these legends exist by a snowball effect where witnesses appear to get caught up in some kind of monster hysteria. That's not to say people weren't seeing a strange beast - a majority who reported the prowler mentioned it resembled a small wolf or a jackal. A Rob Houghton claimed he'd seen an animal resembling a dingo in his garden on June 1st. He stated it was not a fox, but the size of a medium-sized dog although a male witness from Hillingdon claimed that he'd seen a monstrous fox.

On 15th June the Gazette read, 'Ruislip beast sighted again', after a Victoria Cook had her bin raided by what at first she took to be a fox. Possibly influenced by the sightings in the paper, and a photo of a coyote, she now believed something very strange was in the neighbourhood.

A Christina Dobrin was the last person to sight the animal, but could more than ten eye-witnesses to the beast be wrong ? Had they all simply seen a large mangy fox, or had some private menagerie spilled a large canid now looking for scraps in the streets ?

Whatever the case, the Uxbridge prowler story ran like so many other 'beastly' headlines, and after the initial fuss, faded into the realms of folklore. But maybe, just maybe, out there, somewhere in the shadows, alongside exotic cats, mink and capybara's, there is also an escaped jackal, coyote or dingo, even though there's more chance of Basil Brush roaming the streets an imitating Jack The Ripper.