By NeilA Last edited 158 months ago
NeilA The Saturday Strangeness 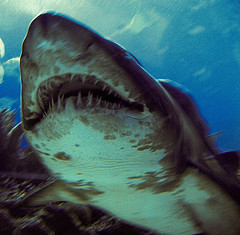 The River Thames was once so polluted that it harboured little life. Now, the river is said to be so clean that many species of creature are said to lurk in its depths. Over the years reports of whales have made national news. Seahorses have also found their way to the waterway, whilst on rare occasions leather-back turtles and walking cat-fish have also been discovered. Certainly the last big fish to have been caught in the Thames were the sturgeon and more recently a Wels catfish, but there is one obscure rumour that a shark was once caught!

Now, sharks have been recorded from the west coast around Devon, but the closest to London a shark has ever allegedly come was a report from 1812, when what was possibly a Basking shark was found on the beach. However, the London Online website reported that on 1st January 1787:

Some fishermen fishing off Poplar with much difficulty drew into their boat a shark; alive, but apparently very sickly. When it was taken on shore and opened, they found in the inside a silver watch, a metal chain, and a cornelian seal, with some fragments of gold lace, supposed to have belonged to somebody who had unfortunately fallen overboard. The rest of the body had been digested, but these articles remained, and were perhaps the cause of the sickness of the fish, from which, and from the effects of the Thames water, it would doubtless have died.

The watch bore the name of Henry Warson, London, and the number 1369, and the works were very much impaired. When these particulars were published, Henry Warson recollected that he had sold a watch to a Mr. Ephraim Thompson of Whitechapel as a present to his son going on his first voyage on board the ship Polly, Captain Vane, bound for abroad. About three leagues off Falmouth, through a sudden heel of the vessel during a squall, young Thompson fell overboard and was no more seen. The news of his being drowned reached his family, who little thought that they would ever hear of him again. Mr. Thompson Senior bought the shark, not for the sake of having it buried in consecrated ground, but to preserve it as a memorial of so singular an event. It was the largest shark ever remembered to have been taken in the Thames, being from the tip of the snout to the extremity of the tail 9 feet 3 inches. From the shoulder to the extremity of the body measured 6 feet 1 inch; round the body in the thickest part, 6 feet inches; the width of the jaws when extended, 17 inches; it had five rows of teeth, and from that circumstance was supposed to have been five years old. This extraordinary account appears in the Annual Register of 1787, under the head of "Chronicle", page 227.

Sadly no species of shark was named, but the next time you're thinking of taking a quick paddle... think again!