You Are Leaving Zone 2: Please Have Your Exit Visa Ready

By jamesup Last edited 159 months ago
jamesup You Are Leaving Zone 2: Please Have Your Exit Visa Ready 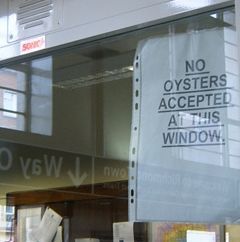 No Oyster Here. Photo By Annie Mole via the Londonist Flickr Pool
The long promised extension of Oyster onto National Rail services, may be due on 2 January 2010: cue Boris tapping in at Clapham Junction photo-op. However, London Reconnections reports the changes include a new element to the Oyster scheme that prevents the 'turn up and go' dream from becoming a reality: Oyster Extension Permits (OEP).

The OEP, as we understand it, is essentially an exit visa for your travelcard zones. When you plan to start your journey within your zones and end it outside, and at any point wish to use National Rail, you need to find a Ticket Stop or Oyster equipped ticket office or machine and load on this free digital permit-to-travel before you start your journey. Then, when you touch in the computer knows to treat you as a wayward and dishonest PAYG user and charge you for your journey in advance, rather than sending you on your way like the trusted season ticket holder you once were. If you're not carrying this electronic paperwork, and one of the revenue enforcement teams spot you, you are outside your permitted zones without a valid ticket and thus deserving of a penalty fare.

The fear is that people with travelcards, each of whom have coughed up upwards of £664 a year for the privilege, will touch in and then disappear out of some distant and un-gated national rail station without touching out, denying the train operators their rightful dues.

In our humble opinion this is quite the most impressively ill-thought piece of stupidity to emerge from London's transport providers in some time (exact blame for this remains unplaced, but the buzz on the forums is that the National Rail companies insisted on it). The disregard it shows for the whole point of Oyster is only exceeded in folly by the fact it targets travelcard holders, surely London's most rule abiding transport users.

Right now as a travelcard holder you can buy an extension to your zones. Do this often? We don't. As with OEPs, you have to find an open ticket office and queue up. Frankly it's almost embarrassing the steps we'll go to to avoid going outside our zones or using paper-ticket-encumbered national rail because we don't like to interrupt our journey and queue. We think most Londoners would agree.

The huge success of the Woolwich branch of the DLR and the people streaming off buses onto the Jubilee line at North Greenwich are testimony to the fact that passengers vote with their feet and want to stay on the PAYG system, even if that means a few minutes more travel or an illogical journey. OEPs shift the billing onto your Oyster account, but otherwise ensure that the interface between TfL services and National Rail for Travelcard holders remains as unhelpful and inconvenient as it ever was.

With this and the addition of differential pricing on the Tube and National Rail, pink intermediate journey readers and the addition of Zones 7, 8, 9, W & G - it seems that the clarity of the Oyster idea is being lost through a creep of over-complication and web of confusing exceptions.

London has been waiting for integrated ticketing for many years. We deserve better.