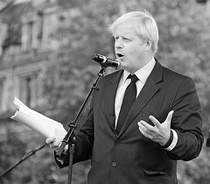 Boris accepts the freedom of Gotham City (Daniel_C_C)
When he sacked Met chief Ian Blair last year, who'd have guessed that Boris Johnson planned to turn himself into a one-man crime-fighting machine?

In what sounds like a dress rehearsal of a celebrated scene from Only Fools And Horses, the mayor came to the rescue of a young woman in Camden last night. The distressed damsel found herself menaced by a group of hoodie-wearing girls, one of whom was armed with an iron bar. But no metal rod can withstand the power of City Hall: Boris, who heard the victim's cries for help, swooped in on his bike, chased the girls down the street and, for good measure, called them "oiks" in the process. Our spring-heeled Jack of a mayor then returned to make sure the victim was okay, and even walked her home. The sheer gallantry is enough to make even the most Livingstonite lady swoon.

It turns out that the young woman was none other than filmmaker Franny Armstrong, director of The Age of Stupid, and a committed climate change activist. Boris has softened his reactionary stance toward global warming since being in office, but Armstrong nevertheless admitted to being a Ken voter; it's likely the man she now calls her "knight on a shining bicycle" can count on her support come 2012.

WIth our oik-scaring Mayor now quite literally taking the youth crime scourge into his own hands, we need to come up with a suitable moniker to reflect his new superhero status. Cripes-lops, perhaps? Blunder-man? The Blond Hornet? Surely you can do better than our (frankly pitiful) suggestions... to the comments, Robin!