Review: "As If It Were The Last Time" subtlemob

By Londonist Last edited 134 months ago
Londonist Review: "As If It Were The Last Time" subtlemob 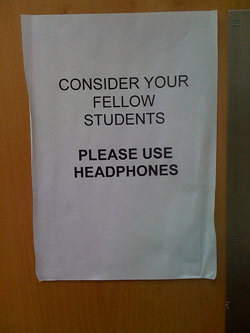 Image Duncan Speakerman
Walking down Neal Street shortly after 6:30pm last Tuesday, one would never guess a mob had just dispersed. There were no policeman, no gawkers, and certainly no damage visible on shop windows or street signs. A few scattered individuals moved swiftly, umbrellas deterring rain away from hair, eyeglasses, handbags - some ducking into the street's many pubs and clothing stores, but none displaying any knowledge that anything out of the ordinary had just occurred.

But had one ventured along Neal Street shortly after 6pm, they might have noticed - something. Maybe it was a couple dancing in the road, maybe it was a group of individuals staring dreamily at seemingly nothing in particular upon the line of rooftops. Maybe it was simply an unusually large number of those white earbud headphones jutting from beneath curls and hats and high-collared jackets. But then again, maybe it was nothing.

But Tuesday's strange happenings were something. They were the actions of a "subtlemob" part of Duncan Speakman's soundwalk piece "As If It Were the Last Time". The idea was simple: find a partner, download one of the instructional mp3s (half of the mob was "Lost" and the other, "Found") from the project website, and at exactly 6pm (watches could be synchronized to an exact time posted online), push play. The subtlemob would unfold from there.

Instructions ranged from simply standing and observing the surroundings to leaning on your partner as if they would fall without your support, but as organisers promised, nothing was illegal or embarrassing - unless you and your partner almost get run over by a BMW while waltzing in the road (our bad). Capricious and profound, the experience definitely captures what it is to escape from the world for a little bit - and then to return and find that you see things just a bit differently. And fact that others around you may or may not be experiencing the same thing only adds to the surreality.

Perhaps Speakman captured it best: "[As If It Were the Last Time] is a celebratory slow dance, a chance to savour the world you live in, and to see it with fresh eyes."

"I absolutely loved it," said one Londoner, "It felt like a movie." Added his partner: "It was amazing to be a part of all these people doing different things, but at the same time."

And who were these subtle mobsters? Even we don't know. For they had a train to catch - to Old Street, they said, as they hurried towards the night, disappearing ever-so-poetically into the mob.