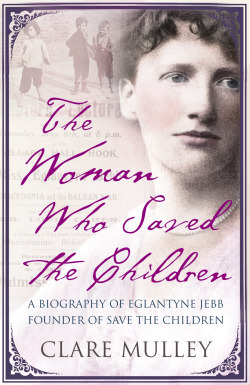 Oh dear. There we were, all excited by a Women in History talk in Putney next week, when we got news that Waterstones had cancelled. And more fool them, because we saw a similar line-up in Kensington the other week and it was smashing.

Anyway, one of the authors due to speak was the highly engaging Clare Mulley, whose book about Eglantyne Jebb, founder of Save the Children, is not only a Daily Mail Biographers Club winner but also follows in her subject's philanthropic footsteps: all author royalties go to the charity.

We asked Clare a few questions about her fabulously named biographee, history and London itself, and frankly her answers were so good we still wanted to share them with you.

Why did you choose Eglantyne Jebb as the subject for a biography?

It amazes me that so little has been written about her. She founded Save the Children at the end of the First World War, and wrote the pioneering statement of children's human rights that has since evolved into the UN Convention on the Rights of the Child - the most widely accepted human rights instrument in history. And yet, rather marvellously, she did not like children much, never having any of her own, and once described them as 'the little wretches'. Eglantyne was a woman who spent her life breaking social conventions as she moved from illicit romance to suicidal depression, and from spiritualism to espionage... But by the time she died, aged only 52, she had won over the Pope and the miners, the British establishment and the Bolshevik government. It was a story begging to be told.

She caused quite a stir at the Royal Albert Hall and in Trafalgar Square didn't she?

Yes, just after the war Eglantyne was arrested in Trafalgar Square for distributing leaflets showing photos of starving Austrian children that had not been cleared by the government censors. She lost the case, but gave the court reporters plenty to pad out their stories with - especially when the crown prosecutor donated the sum of her fine towards her cause. This was the first donation put towards a new Fund for the starving children of Europe; the Save the Children Fund. Building on the publicity, Eglantyne and her sister Dorothy launched the Fund at a crowded public meeting at the Royal Albert Hall, winning over even those who had arrived with rotten fruit to throw at the 'traitor' sisters who wanted to feed the former enemy. 'I have no enemies under the age of seven' she later said.

Is there still a need for specific women's studies now?

I think there is still a need to redress the balance from the 'great man' view of history, and look more deeply at the less travelled areas of gender and culture where there are some fabulous stories, often with huge resonance for modern life. Historians like Amanda Vickery are doing great work here, but it would be good to see more.

Have the 'famous' women from history been done to death?

Some lives do get a lot of attention, but new biographies of Elizabeth I and Florence Nightingale show that there are both original sources still waiting to be looked at, and that each generation can profitably look again at the past from a new perspective. That said, there are many fascinating lives that never get a look in, and we are much the poorer for it.

Which figure from London's past would you like to meet and why?

I would quite like to meet Eglantyne chalking up the pavement round Trafalgar Square, just to see how closely I caught her likeness. There are so many others though. I'd like to sit behind a paper in the early coffee shops, be ferried across the Thames, and slip in behind closed doors both upstairs and down at any time from about 1700 onwards.

What's your favourite bit of London?

I love Westminster Abbey with its secret gardens and museum, Borough Market and the streets round Spitalfields, and I am always happy in my sister's kitchen in Herne Hill.

Yes, into my bag. I was pleased to find that Eglantyne was once so excited coming back from a dance that she was, in her brother's words, 'magnificently sick' out of the carriage window, so I feel I am in good company.

The Woman Who Saved the Children: A Biography of Eglantyne Jebb by Clare Mulley is available to buy now.