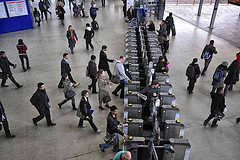 By Mike King
The Mayor today announced the 2010 fare package for TfL with inevitable, but unwelcome, above inflation fare rises. Not much of a surprise. We saw it coming but it still bites. Overall bus fares rise by 12.7% and tube fares by 3.9%. The Congestion Charge hits a tenner and is there any sign of the Western Extension scheme being scrapped? Hmm. Surely it's an ever more distant Borisian possibility, given the funding black hole these increases are designed to plug.

Boris asks us to "accept this difficult decision and twunts that it is "painful in the short term but critical for London's long term future."

Who knew that TfL's hearty promotion of walking and cycling over the past couple of years was, in fact, preparing us for the time when we couldn't afford to take public transport? Small mercy though, the monthly Travelcard cost stays put.

You can get the lowdown on changes to fare structures over at London Reconnections and read Boris' announcement - signed with a flourish - in full here. He thought it important to "write to you directly". We think it's important that everyone writes back: @MayorOfLondon.