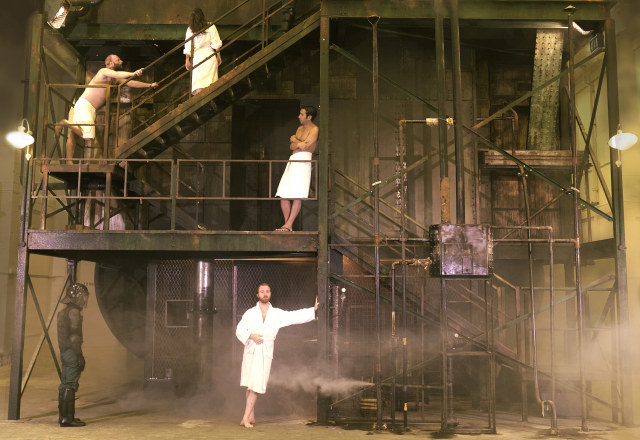 The ten-man production team Shunt is back with another mind-boggling but nonetheless spectactularly alternative show: Money. Like its other productions Tropicana and Amato Saltone, emphasis is on location and impressive sets rather than strong narrative making the show more of an enhanced visual experience than straight theatre. Based loosely upon Émile Zola’s novel L'Argent, the story takes place in the late 1800’s and centres around the rise and fall of a prominent French bank and the spiralling affects that has on the rest of France - an ordeal all too similar to today’s financial crisis. Was this clear when watching the production? Not at all. Does that matter? Not particularly.

It's the new warehouse space on Bermondsey Street and the magnificent three-storey set closely resembling an old hydraulic power station that takes centre stage. From the moment you enter the space, the foreboding structure trembles and creaks, something remindful of Terry Gilliam’s futuristic film Brazil. A beast-like creature can be seen climbing around while a man resembling a SWAT Team Officer hands out balloons to the audience (sounds strangely like a Banksy figure?). This is only the start of such random acts... The show officially begins as the audience (all 50 of us) is guided up the stairs of the structure and into a small waiting room. Typical to Shunt productions, several cast members sit amongst the audience, and always jolting to us non-actors, suddenly stand and start firing questions at us. You have no choice - you are now a character in the charade.

Beginning with one man’s determination to overcome bankruptcy, the set opens up from the claustrophobic room to three wondrous glass floors allowing us voyeurs to watch our main character in various scenarios trying to build his business. The rooftop which we can now see through also see plays host to ominous characters lurking around alerting us that darkness is near.

Without giving too much away... the audience is led from room to room, each one shedding light on our character's dubious plans. The inevitable downfall leads to a chilling finale of darkness, spooks and howls. In just one hour, you are tried and tested. From desperation to celebration (which includes champagne for all!), the audience is taken through the same journey as the lead character creating a blurred boundary between fiction and reality, one of Shunt's specialties. Best not to try and understand it, and instead just go with the visual madness and absurd ongoings.

Not quite as good as previous shows, but still highly recommended for its efforts. Try and get there early for a drink outside under the fairy lights and perhaps another one or two after the show at the indoor bar adjacent to the structure.

Money at the New Shunt Space on 42 - 44 Bermondsey Street, booking until 22 December. For more information and tickets, go to Shunt's Money website