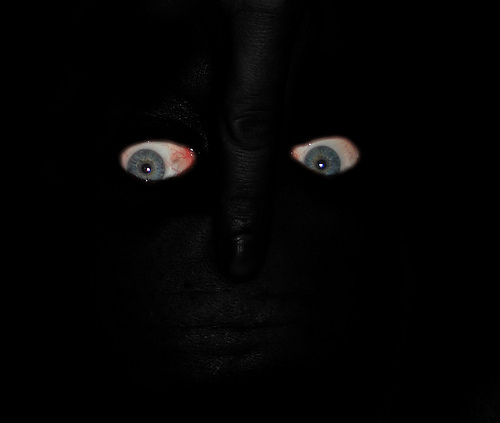 Mr Stock moved into his home in Highbury during 1849. Although the door number was 13, Mr Stock was not prone to superstition. And the overhanging trees and overgrown garden also did not deter Mr Stock. The rent was cheap, and that was the main thing.

Mr Stock employed a housekeepr, a Mrs Brown. Their first night at the property was a little strange, because as Mr Stock retired to bed, on passing a window he noticed not only his own reflection, but one of a very ugly, almost hideous looking man. Again though, Mr Stock had more important things on his tired mind. The following night whilst reading a magazine in bed Mr Stock dozed off but suddenly awoke. In the glow of the candle he noticed an old woman at the far end of the room. Eerily, the door began to open and the haggard figure slinked out the exit. Mr Stock's yell alarmed Mrs Brown who comforted him but told him it was just a dream.

Two weeks went by without event, until that night he returned home from the theatre. With candle in hand Stock crept wearily upstairs. Staring once again, possibly by habit now, at the window, Stock noticed in the reflection that someone was following him up the stairs. Turning round he saw a terrifying apparition. A ghastly, wretched face almost obscured by a head of wild, shaggy hair. The figure had a hunched back, and its face was illuminated by some unnatural light. The sinister ghoul clutched a table knife in one dirty paw, and slowly ascended the stairs, step by step, towards the cowering Mr Stock.

Bizarrely, as the figure came closer, Stock realised that the monstrous spectre was completely oblivious to his presence, gliding by him on the stairwell and heading towards Stock's bedroom. Stock, almost frozen with fear, found the strength and courage to follow the intruder. The beast reached the door, turned the door handle slowly and entered. Stock peered over the shoulder of the wraith at a distance, just in case the hunchback suddenly became aware of Stock, who clearly at this point was not on the same astral plateau.

Stock then saw the elderly woman he'd seen in the 'dream'. She looked petrified as the hunchback leered with menace and approached her. Suddenly, the door slammed shut by the force of the wind. Stock reached for the handle, desperate to free himself from the horror about to unfold. However, when he quickly glanced back at the room, there was no terrified woman, and there was no evil hunchback. Stock ran downstairs and spent the remainder of the dark hours with gaslight in full flow.

Shortly after, Stock was brave enough to search the house but found no other presence or sign that anyone had been there. However, he did find that many years ago the house had been inhabited by a woman and her rather deformed son. Rumour had it that the woman left home and allegedly died abroad and the hunchback stayed in the house, never venturing in to daylight. Local word said that the reclusive figure then mysteriously vanished.