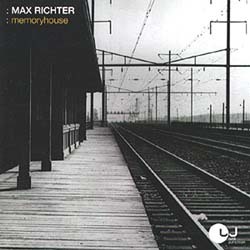 We would probably go to the Union Chapel to hear someone open and close a door. Especially now the long autumn nights are drawing in, there seems like no better place to spend an evening than inside this monumental, dark, candle-lit room. With the added delight of Max Richter’s beautifully melancholic music there will be no keeping us away.

Richter’s music is perhaps most recognizable from film scores. He recently scored the Israeli animated film Waltz with Bashir and his haunting, sparse, melodies were the perfect accompaniment to the film. One of his most famous pieces On the Nature of Daylight is also due to feature in Martin Scorcese’s new film Shutter Island.

Richter is a classically trained pianist but the Union Chapel show will encompass the full range of his composition with strings, vocals and live electronics to a backdrop of Derek Jarman’s films.

The event will showcase the re-release of his first album Memoryhouse: a strikingly evocative album. Richter himself calls the album a piece of “documentary music,” and upon listening it is clear why: each track seems to evoke a sense of nostalgia for a time that has passed, whether real or imaginary. Musical themes run through the album and re-appear in fragments throughout. The unpredictable shift from orchestral to electronic media and back again only adds to the effect.

We highly recommend you get your ticket booked to this as soon as possible lest you miss out on what will surely be one of the live musical highlights of the autumn.

Tickets can be booked from here and here

Memoryhouse is re-released by Fat Cat Records on 26th October