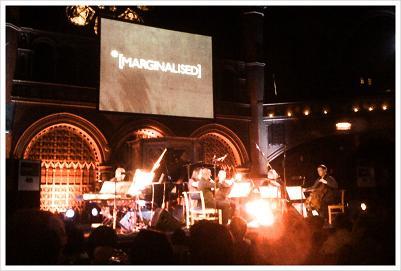 Part of a four-day musical festival dedicated to raising money and support for the charity Margins, Friday night’s event was an aural and visual pleasure from start to finish.

The Union Chapel’s warm and peaceful candlelit chamber was particularly inviting on this blustery autumnal night and we took our seats as Indonesian gamelan group Sekar Enggal played a quietly harmonious and meditative set.

Before the main event we were given a short introduction to Margins, a drop-in centre that runs out of the Union Chapel for local people otherwise marginalized by society. They have experienced a massive drop in funding recently as a result of the economic climate, in addition to a concurrent rise in the people who need their services, and profits from the ticket sales as well as the bar go directly into helping to fill this funding gap.

Shortly after the room descended into a reverent hush as Richter took to the stage with his five-strong string section and assorted electronic accoutrements. He started with a few memorable pieces from The Blue Notebooks, Memoryhouse and Songs from Before: they echoed and resonated throughout the room being both understated and intensely emotive at the same time. However, although the minimalist modern classical music familiar from Richter’s albums is always special, it was the second half of his set that provided the real treat of the evening.

In the second half Richter presented music from his album The Art of Mirrors to a backing of excerpts from Derek Jarman’s film by the same name. Richter’s signature discordant strings became one with Jarman’s disturbing imagery: a cowering masked creature overlooked a bizarre mating ritual between a flamboyantly dressed man flashing a mirror into the screen and a disheveled yet glamorous woman with strings of pearls hanging from her mouth. By the end of the set we were completely entranced and only re-entered the space to stand for the ovation that Richter was rightly given.

Information on the Margins project is here