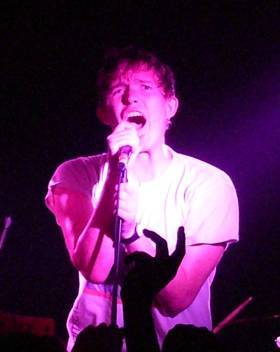 Wednesday night saw Cardiff’s seven headed ambassadors of twee, Los Campesinos! come bouncing back to London to headline a good old indie-pop love-in the Garage in Highbury, with all three bands on the bill helping out in each other’s sets.

First up was lo-fi folk with a hint of They Might Be Giants from the multi-talented Sparky Deathcap, who will inevitably draw comparisons with Jeffrey Lewis, not least because he’s also a cartoonist and incorporates this into his show via a PowerPoint presentation. Sparky was joined by Los Campesinos! for a couple of tracks, and later repaid the favour, as well as joining in for a song or two with the next act, Copy Haho.

Copy Haho hail from Scotland and follow in their country's fine tradition of jangly indie-pop, bringing to mind Orange Juice and early Delgados. There’s already quite a buzz surrounding them, and as a bonus their bass player looks unnervingly like Ian Curtis, so what could possibly go wrong?

Finally Los Campesinos! take to the stage, armed with glockenspiels, cute boy-girl vocals and some of the longest song titles in recent memory (e.g. “This Is How You Spell ‘HAHAHA, We Destroyed the Hopes and Dreams of a Generation of Faux-Romantics’” off their debut album). They’re the kind of band that’s always going to divide opinions, but tonight is their night and the grumpy naysayers have stayed away leaving the faithful to enjoy a typically energetic performance from their heroes.

“Death to Los Campesinos!” sees an almighty sing-a-long, with the audience drowning out the band. Several tracks from their forthcoming album, including current single “There Are Listed Buildings”, get an airing, but the undoubted highlight has to be a frenetic performance of the anthemic “You! Me! Dancing!”. One of the greatest talents of Los Campesinos! is their ability to encapsulate the joyful exuberance of youth, and this Londonista walked away feeling 16 again.