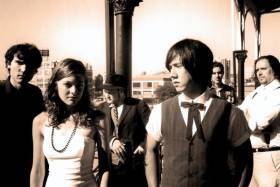 This Monday sees Nashville-based six-piece The Young Republic wrap up their UK tour at Shoreditch's Cargo in support of their recently released second album, “Balletesque”.

Fans of the End of the Road Festival are already likely to familiar with their charms as, whilst notably absent from this year’s line-up, they were pretty much unavoidable in the previous two festivals, playing several sets each year and winning the hearts of many plaid shirted revellers along the way. The organizers were obviously suitably impressed too, as The Young Republic were the first signings to their record label, End of the Road Records, and are also hosting Monday's show.

Formerly an eight-piece, we’ve seen their line-up and style change significantly since their debut album early last year, the wonderful “12 Tales From Winter City”, which saw them come across as the American Belle & Sebastian. Citing the usual list of greats as influences (Brian Wilson, John Lennon, Bob Dylan), the refreshed line-up, fronted by Julian Saporiti, sees the band adopting more of an 60s rock ‘n’ roll sound. A risky move after their well received debut, but they keep things interesting by also incorporating elements of country, folk, jazz and classical into their overall sound. So head on over to east London for a night of lush American rock with hefty pop hooks.