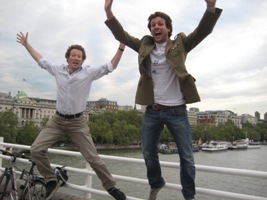 Nick Gardner and Mark Shearer
Frustrated by "sodding confusing, political and opinionated" advice on how and why to be green, Mark Shearer and Nick Gardner decided London needed Project Dirt.

It's a south London facing website that provides a platform for projects with an eco-friendly bent to link up, and a website that showcases examples of real Londoners doing real things to make our city a greener place. Three years on and 18 months since going live, the website has attracted over 1,500 members without any kind of marketing and is planning to go London-wide, then national, then global! We met Mark for lunch in King’s Cross, close to the Hub where he’s masterminding his dirty empire.

So, Mark, how did it all begin?

It was four years ago, I was 25, working in property, but with a lifelong interest in the environment (I'm mesmerised by Attenborough). But I found the green movement a disjointed one, I found it frustrating, confusing. An internet search revealed that there were three Transition Towns in one London borough and two compost clubs in the same street that Nick lived in. We could see there was a need for a platform for these projects to sit on, where they could see what each was doing and collaborate.

There was also a need for a space where the general public could see from afar examples of people taking positive action and also get genuine advice, the kind of advice you'd get from a mate in the pub. And practical advice too, not just abstract things like 'top ten tips to save energy' or 'put a brick in your cistern' wisdom, but advice from real people doing real things in their communities.

And so Project Dirt was born..?

When we started we were just five people and a project, well two people if I'm honest because that includes Nick, myself and our tech guy. The website went live and we decided not to do any marketing, to just see what happened relying on word of mouth.

Project Dirt's website is hosting all kinds of local London projects now, from Friends of the Earth groups to grow your own projects on housing estates. We're attracting attention from international companies like Timberland, from political figures like Rosie Boycott and from borough councils like Wandsworth. People know who we are suddenly. We dared to do it and it's lovely hearing people giving us positive feedback, telling us how Project Dirt has helped them.

What happens if two Transition Towns from the same borough register?

We introduce them and get them to work together.

And are there any rules?

Anyone can sign up and become a member. We have almost 1,500 so far. In terms of projects, we've got a broad remit for the kinds that can join and be listed on the site, but ultimately they have to have a green core. We had a humanitarian project contact us recently about being on the site but we had to say no. What they are doing is great, but Project Dirt wasn't the right space for them.

There are lots of green websites and forums, what makes yours unique?

It’s that we’re saying enough to talking, that we are featuring projects that exist, people that are taking actual action. I think our neutrality makes us unique too, and our transparency. The site is all based around groups, a bit like the Facebook group system. Individuals can use the forum to network but we’re defined by the projects.

We're offering people a chance to put their projects on the map, to list their events, share their knowledge and seek advice. We're providing them with web space, with project management tools, even with a press office in some cases.

It's important to emphasise that our current site is a test site too and that, although we've started with a south London bias, we are keen to be London-wide. We hope to launch a new website in the next six months, something more sophisticated but even simpler to use. We'd like Project Dirt to go national, even global. It's south London and also urban in character at the moment, it's quite an intimate space defined by neighbourhoods, but I think it will expand its borders well.

We're looking for funding, and we will charge certain groups to join, like companies and local authorities. For individuals and other projects it'll stay free. We'll sell advertising too.

Is it completely virtual? Do you ever meet the people behind the projects, get your own hands dirty?

Nick and I are very hands on, we act like mediators between the projects and visit them all the time. This is my full time job now. I'm doing IT workshops at the moment for our users who are over fifty because they want to understand how to use the site more effectively.

Scary, but exciting, I've been asked by Earthwatch to take part in a debate at the Royal Geographical Society in November. It's going to be some kind of ecological Dragon's Den! I think they asked me because I'm a bit ordinary, business minded rather than a scientist or a boffin.

Tell us a bit more about Timberland, Wandsworth and Rosie.

Timberland approached us out of the blue. At first we weren't convinced, but their sense of corporate social responsibility seemed really strong and so we set up project fund with them. Four pots of £500, which projects could apply for and was very popular. We're now administering a Timberland Earthkeeper grant. I really believe it's important to work with the big guys because the small changes they make have a wide impact.

Following on from that Wandsworth Borough Council are now using Project Dirt as a way of managing their new eco fund. Projects will be able to apply for money from its £5,000 pot through our website. Rosie Boycott has been in touch too and is a big fan!

What are your favourites on the Project Dirt website?

The Brixton Pound and Let's Go, Let's Grow. I also really like The Wandle Trust, who organise monthly river clean up sessions attracting about fifty volunteers each time. And Devonshire Road Nature Reserve in Forest Hill, run by a star called Iris who rescued the site and is now busy installing beehives and setting up a kids' club.

The people who've signed their groups up to Project Dirt are trailblazers and mini heroes. If you look at our webpages you get a window into a bit of London where people are achieving great things.

Find out more at projectdirt.com