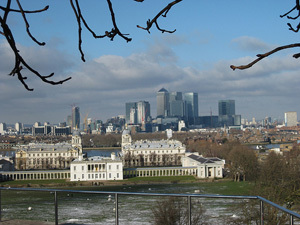 With the historic backdrop of Wren's Royal Naval College and the sweeping Thames, it's hard to imagine a more visually splendid setting for the Olympic equestrian events than Greenwich Park. Local campaign group NOGOE (No to Greenwich Olympic Equestrian Events), as you've probably guessed by their moniker, beg to differ.

Over the weekend, protesters gathered in the park to show their indignation at the choice of venue. Despite the rain, an estimated 500 plucky 'park lovers' gathered outside Queen's House to raise awareness for the potential harm to the local area. Turnout was nowhere near commensurate with the hoped-for 'ring around the park', but sizeable enough to cause a bit of noise and help spread the word.

We have to say, though, that some of the group's claims do look a little over-egged, some would say NIMBYish, from an outsider's point of view. Despite assurances that no trees will be cut down, and the well documented regenerative properties of grass, the group assert that the events will 'cause damage' to the space. What they describe as their 'small urban park' actually has a perimeter in excess of two miles. True, park closures will occur, but the children's playground and flower garden will remain open throughout (and there's always the massive open space of Blackheath at the top of the hill). Finally, claims that local businesses will suffer seem a little bizarre, given the legions of well-heeled horsey types who'll be hanging around.

As always, 853 blog provides a well considered, balanced view of the ongoing debate.