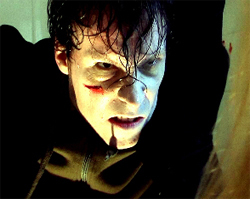 You're not supposed to give zombies names. It makes it easier to aim for their heads. But this one is called 'Colin', and you just can't help to not want to kill him.

Colin shows a unique perspective of what life is like for a freshly ordained London zombie. At 97 mins, it tracks the pits, perils and personal journey a zombie would face if he were, say, to roam around Tooting.

After excellent PR buzz surrounding the film thanks to its titanically low budget (£45-50, which was said to have been spent on tea and crappy biscuits) the film delivers a very arty addition to British zombie fiction. The detailed creepy moments are generally well timed, and the ending wraps up solidly. The main nit pick is that it's too long for what the film sets out to show, with some scenes being a bit overkill (pun intended) time-wise. However the film is a nice indie addition to such classic London based zombie hits as the horror/action 28 Days/28 Weeks Later and the horror/comedy favourite Shaun of the Dead.

You can pick up a copy of the DVD today at HMV Oxford Circus and even have it signed by 'Colin' himself, why not, 'tis the season!