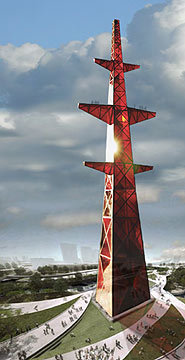 Could this crimson pylon be built on the Olympic site? The Times has gotten wind of a plan to build a colossal monument near Stratford to act as a lasting architectural legacy for the games, driven by the Mayor. “He wants to build something quite stunning in its ambition, like the Eiffel Tower or the Statue of Liberty — a tribute to London that people will fall in love with,” says a 'source close to Boris'.

The report is positively squelching in speculation, yet hard facts are as difficult to find as a science advisor on the set of Heroes. The paper links Britain's richest man, the steel magnate Lakshmi Mittal, to the project, yet all quotes are anonymous and other sources have failed to get any official word. Where exatly would it be built? How soon would construction need to start? Plus, the ruby edifice shown to the right is given as an illustration of the tower, yet we're told its only one of five separate designs being considered (two of which come from men of the moment Anish Kapoor and Antony Gormley). What do the others look like?

There's plenty of negativity about the nascent project. Would the Mayor really risk public ire by building a 400ft pylon after spending so much money to remove such structures from the Olympic Park? Brian 'Grumpian' Sewell gets the last word, calling the project a monument to ego and an example of fascist gigantism.

Whatever gets built will no doubt be universally lampooned at first, thanks to its connection with the easy targets of Boris and the Olympics. But if it is privately funded, and if the design has merit, there's no reason such a tower couldn't find a place in the affections of Londoners after it has settled in for a few years. However, there's one big problem with building a huge, attention-grabbing totem for 2012 - Western Europe's tallest building, the Shard, will be topping out around the same time a couple of miles to the south-west. The 'Piffle' Tower might just be overshadowed metaphorically and actually.