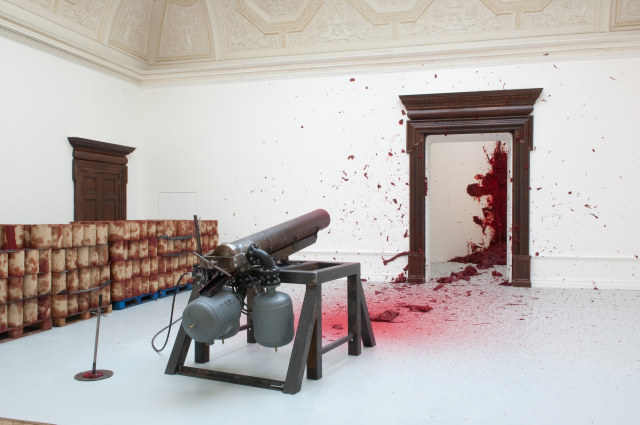 Anish Kapoor's solo exhibition is drawing crowds to the Royal Academy with its giant load of wax on rails traversing Burlington House from one end to the other, a room full of concrete turds, a batch of disorienting reflective stainless steel sculptures and other, giant, inviting and bemusing, overtly sexual and eminently tactile pieces. But please don't touch.

The flagship of the show, Shooting into the Corner fires a cannon ball of red wax into a far corner every 20 minutes. The resultant red goo builds up in a small room over the life of the exhibition, while the nearer white walls are dramatically splattered, by turns resembling the remnants of a massacre and one hell of a paintball war gone wrong.

It's sensorily stimulating, fun and impressive and we've got three pairs of free tickets to give away. Email londonist at gmail got com with Anish Kapoor in the subject line. Tell us the name of the beautiful ballsy sculpture installed in the courtyard of the RA and if you're the 3rd, 5th and 7th person to email in correctly, you win the tickets. Winners will be notified by email