Girls Warned Over Getting Involved With Guns 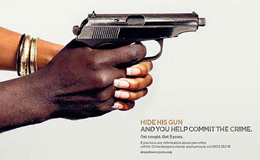 Perhaps taking Jean-Luc Godard's movie-making maxim that "all you need is a girl and a gun" too literally, gang members in London are increasingly furnishing their firearms on the female of the species. Young women in London are squirreling away weapons for boyfriends, brothers, male friends and significant others, and are often coerced or pressured into doing so. The growing problem has prompted a new campaign by the Metropolitan Police, urging the capital's womenfolk not to get involved.

Under the legend "Hide his gun and you help commit the crime", a poster which is going up around town features a male and female hand jointly gripping a pistol. The campaign aims to impart the message that storing or transporting weapons used by criminals can lead to jail time of up to five years. The problem is reportedly most acute among black teenagers aged 15-19 in boroughs with significant gun crime issues, including Haringey, Hackney, Southwark and Lewisham.

Police note that the number of women charged for firearms offences has "doubled" this year — though at 12 it's still low. But the age of those involved is dropping: a 16 year old girl was arrested recently after a loaded 9mm Browning was found in her bedroom, and another 14-year old was also taken into custody. Operation Trident hope the message will get across that this is an offence with a stiff sentence.