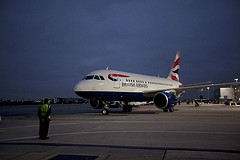 Shortly before 7 this morning, the first ever transatlantic flight from New York JFK to tidgy London City Airport is due to touch down. In fact, estimated for 6.48am it's trespassing pretty close to the airport's noise abatement limit of no flights before 0630.

Will it be popular? Mainstream press have suggested that when the flights increase to twice daily, BA forecast a revenue of 'up to' £100 million a year. This assumes that all 32 flat-bed seats on the little Airbus A318 would be filled each way each day, and that all customers pay the full fare of £5828 return.

This is a nonsense - although BA sells most of its premium seats to corporates, big clients negotiate a rebate based on the volume of their annual spend which knocks that all but six grand down to something much more manageable.

And it's not selling particularly well: on a random October Monday (which you might assume to be a busy business day) the flight to New York shows 30 unsold seats on www.seatcounter.com, and BA has also been cracking it out for about £950 each way, not exactly 'super premium' price.

Outbound from London, the service isn't direct, there's a pitstop at boggy foggy Shannon in the west of Ireland for refuelling and customs clearance. This means that on arrival in New York you pull up to a domestic gate and won't need to pass through immigration. The timings of the service though are such that if there's a weather or operational delay at Shannon, you're stuck there for the night since the only other services across the Atlantic left before you arrived.

Feedback on the admittedly bitchy aircrew and frequent traveller sites like The Professional Pilots Rumour Network suggests that it's not all plain sailing inside the cabin either, with gripes about the seating which is side by side instead of herringbone so you may need to disturb your reclined neighbour when getting from the window seat to the aisle. Food and drink aren't lavish either - in New York you eat in the lounge before boarding, and that's just a pretty average self-service buffet. Breakfast can be served on board if you want to be woken an hour or so before landing, but BA is pushing a takeaway bag of cereal bars and smoothies for busy execs.

First and Club class arrivals at Heathrow get a spiffy lounge, hot breakfasts, showers, suit pressing and even massages - arrivals at City must jump in a cab or on the DLR and head, rumpled, to their appointments.

It all feels a bit Gordon Gecko - not only lunch, but also now breakfast is clearly for wimps.