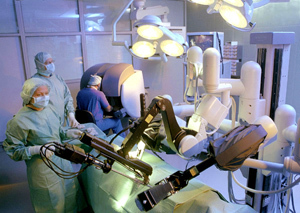 If the phrase 'robotic surgery' conjures up gruesome images of a buzz-saw wielding automaton, indiscriminately carving its malfunctioning appendages into the prone body of an unfortunate patient, you've probably been watching one too many episodes of Futurama. It's not like that in real life, as a new exhibition at the Hunterian Museum demonstrates.

Our Museum of the Month normally concerns itself with the history of surgery, artfully told through the specimens of 18th Century anatomist John Hunter. The new Sci-Fi Surgery exhibition, as you'll have guessed by now, looks to a robotic future.

Our mechanical friends have long been a feature of the modern operating theatre. An early example, on show in the exhibition, was the 'Probot' - a small bench-top device for modelling and then operating on the prostate. Almost two decades of progress have culminated in the Da Vinci surgical system (shown above), which can perform minimally invasive surgery using pincer probes less than a centimetre wide, and without the shakes of the surgeon's scalpel.

Robots will soon take on additional roles in medicine - whether its in the form of a roving 'nursebot', or a pill-shaped probe that can wriggle its way through your body to a disease site. The exhibition lays out the possibilities through models, video and description.

A final cabinet glances through some of the fictional uses of medical robots. Comic books, films and novels - some almost 100 years old - frequently depict the scenario in our opening paragraph, with medical droids going a bit screwy (presumably, a textbook appendectomy is not the stuff of top sci-fi). In a cute touch, a selection of Star Wars action figures are included as a talking point for people of a certain age. We'd never have expected to see Darth Vader in the Royal College of Surgeons.

Altogether, this is a compact and revealing exhibition, exposing a 'cutting edge' rarely encountered by the non-anaesthetised public. To be fair, though, we were left wanting more narrative. Most of the exhibits were presented with minimal description, and the sci-fi aspect felt a little underplayed. Will robots ever replace surgeons, or merely assist them? How do patients feel about going under a knife wielded by a machine? And just how likely are the scenarios of gory malfunctions? Still, this acts as an effective springboard exhibition to promote awareness of and interest in a field about to enter its golden age. We suspect that any follow-on exposition a decade from now would be very interesting indeed.

Sci-Fi Surgery runs from 8 September to 23 December 2009 at the Hunterian Museum, located in the Royal College of Surgeons on Lincoln's Inn Fields. Entry is free. Watch out for further posts about this very special museum over the rest of the month. Image © 2009 Intuitive Surgical, Inc.