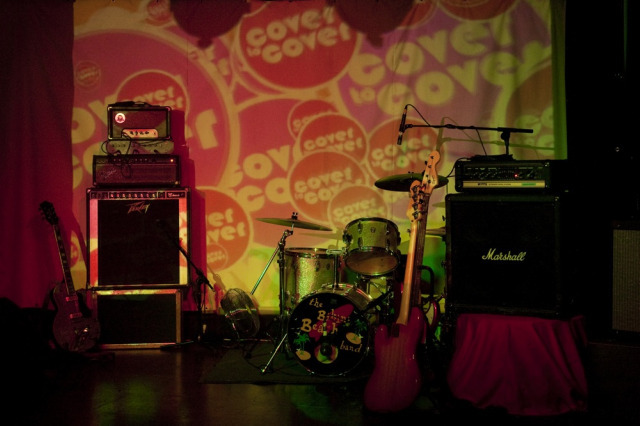 When you're told the men behind Buttoned Down Disco and Guilty Pleasures have come together to form a new clubnight, you know you're almost guaranteed to have a good time. Cover to Cover is the night, and their 2nd ever party will be held this Friday at Queen Of Hoxton (warning - stupid name, it's about 15 minutes from Hoxton right at the very other end of Curtain Road).

We've got a pair of guestlist spots for the night so if you fancy going along email londonist at gmail dot com with covers in the title and let us know what your very favourite cover song is.

When and why did you set Cover To Cover up?

Myself and Sean Rowley from Guilty Pleasures had the idea earlier this year, and so far the clubnight is still a little baby as we've only done one party so far - our second is on this Friday (2nd Oct). We both have a passion for cover versions and I had been playing them in my sets for years, sometimes theme-ing them into little groups even. There's so much scope to play with, and that's why it's so exciting!

Who are your DJs and what do they do in the real world?

Well I (Christian Laing) host the basement and in the 'real world' I also run Buttoned Down Disco and Shake, Rattle & Bowl, in other words I have pretty much dedicated all my time to running music events, and I love it. Sean is another music obsessive, he founded and runs Guilty Pleasures at KOKO, used to be tour DJ for Oasis, compiled the original All Back To Mine compilation and does radio shows. I guess that IS the real world to us....

Yep, covers only. We don't do remixes or 'originals', and we still only have time to play a fraction of what we want to share with the world...

What makes a winning cover?

Typically, it's the idea of a song either being re-interpreted in a clever way, or a song done better by another artist. There are so many examples of this.

Have you ever had any celebs on your dancefloor?

Well it's early days, but Mr C from The Shamen was at the launch night!

What's the Queen of Hoxton like as a venue?

Beautiful, we really like it. It holds about 500, has a nice clubby basement where we put on live acts each month (this month it's a nine piece brass band called Brassroots), and the ground floor is a nice bar type space which also has a good sound-system, so we get to play with two floors of music. Plus there are lots of discoballs, which is always nice...

Tell us one artist who we might not have heard of that you play that we should check out?

Well at the moment I really like an outfit called Mr Hopkinson's Computer, who do kind of robo-pop versions of indie hits and for live shows, his computer sings in front of a microphone! We're gonna put him on live for sure!

Almost like the busker who plays with a Henry hoover! Brilliant. So when you're not Cover to Cover-ing, what other club nights do you like going to in London?

Well I run a lot of nights myself, but I like going to Lady Luck and similar vintage music clubs when I get the chance. Or anything trashy or poppy is always good!

Where do you hope Cover to Cover will be in the next few months?

Well I think it's possible that we might take the concept to a few festivals next year, but it's early days so we'll see.

And what's your dream venue?

I always wanted to DJ in the Below Zero ice bar, but I guess my fingers would freeze after 30 minutes on the decks. So I would say The House Of Commons. We could kick out all the suits and have a big rave up instead!

Queen Of Japan - Living On My Own

And your all time favourite Cover to Cover floor filler?

It's gotta be I'm So Excited by Le Tigre!

Catch Cover To Cover this Friday from 9pm at The Queen of Hoxton, Curtain Road (formerly Industry). Entry is £7 or £5 with an email invite (sign up on their website).