By NeilA Last edited 156 months ago
NeilA The Saturday Strangeness 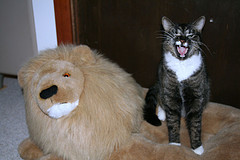 When Mrs Laursen moved in to her central London flat with her husband and six domestic cats, never in her wildest imaginings could she have been prepared for the strangeness to come.

For the next year the abode provided the couple, and their closest friends with regular entertainment. The phantom roar!

The couple settled in and each evening when Mrs Laursen fed her litter of six, as soon as the cats began to munch on their dinner, a disembodied roar would echo through the apartment. At first this feline snarl caused stir. Had a large, exotic cat escaped from some zoo or nearby private collection ? It didn't seem so, and yet, every day, for a whole year, without fail, this roar would reverberate throughout the place, mainly filtering down through the corridor where the cats ate their food.

Mrs and Mrs Laursen soon became accustomed to the sound. They theorised, with tongue firmly in cheek, that maybe... just maybe some kind of ghostly big cat was prowling around some unseen zoo park, and had been drawn to the flat because of the domestic cats - but why were there no sounds outside the flat? Had the zoo park or private menagerie once sat on the ground now occupied by the block of flats?

On many evenings, friends would visit and over a glass of wine and a take-away the group would laugh and shiver as the sound filled the air for the short time the cats were fed. Eventually however, the couple outgrew the flat, and decided to move on. They bid their fond farewells to the place and whatever whiskered apparition roamed the area, and never again were they troubled by the ferocious tone.

Who knows whether the next occupants were plagued by the sound, although if they were, I doubt very much that they were as comfortable with it as Mr and Mrs Laursen.