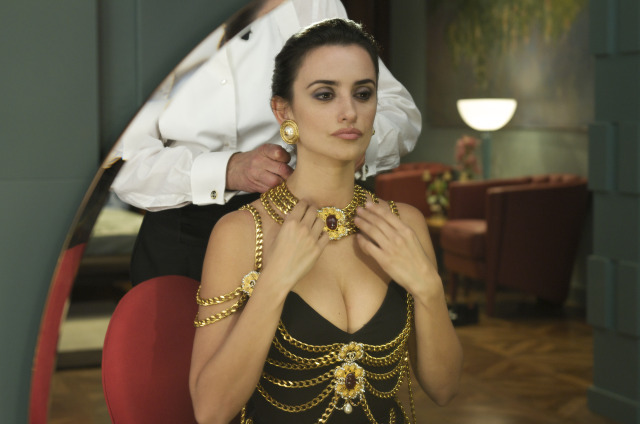 Our weekly round-up of film reviews

Pedro Almodovar's latest, Broken Embraces, reunites him with Penelope Cruz, back in Spain and clutching her Oscar. "The plot is merely an excuse for Almodovar to exorcise his own postmodern obsessions" says the Times (4 stars), but if you insist on a breakdown, here goes. Mateo Blanco / Harry Caine (Lluis Homar) is a former film director, now blind and writing screenplays. We flashback to the 90s when he made a film bankrolled by a dodgy financier and starring the financier's mistress, played by Cruz. But while the Independent (3 stars) might think "it's pleasant to get lost in this maze of doubles and duplicates, and to spot other movies in its densely allusive texture", the Telegraph is a little more impatient with the "riddle, wrapped in a mystery, inside a slightly overindulgent parade of gushing film references... [but] it's still an impossibly succulent thing to behold" (4 stars). The Guardian, meanwhile, believes the "sensual pleasures... are the more intense for being fleeting... it is a film in which the director demonstrates a continuing, virtuoso fluency in a cinematic language that he himself invented" (4 stars).

The Hurt Locker is set within a bomb disposal unit in Iraq and, as you might expect from director Kathryn Bigelow, is big on explosions. Yet, reckons the Guardian, she "says more about the agony and tragedy of war than all those earnest, well-meaning movies that sound as if they've been co-scripted by Josh and Toby from The West Wing" (5 stars). It "is a film that blazes with dramas both very large and very small" (Evening Standard, 5 stars); "a spare, unyielding masterclass in the racking-up of tension to the point thrill distorts into exquisite agony - not a second relents" (Empire, 5 stars). The big names in the cast are only onscreen briefly, allowing the relative unknowns to dominate. Main man Jeremy Renner plays the unconventional, perhaps crazed, staff sergeant, "his blunt, froggy countenance is not that of a hero, or a leading man. Perhaps that's the point" wonders the Independent in another 5 star review. General consensus: film of the week.

Adam Sandler is so much better at playing dark and bitter, it's a wonder he ever does anything else. Thankfully Funny People, from Judd Apatow, is less along the lines of Knocked Up and more along the lines of Sandler's other murky character from Punch-Drunk Love. The film is Apatow's "poisoned valentine to the comedy business... The director loves his subject; he hates his subject" (Evening Standard, 3 stars). Sandler plays billionaire comedian George who, on learning he's dying, takes struggling comic Seth Rogen under his wing. "Inevitably, the movie doesn't turn out to be as dark or sad as it first appeared" cautions the Guardian (4 stars) but the Telegraph thinks "there's simply more to it than any other mainstream comedy this year. When it's good, it's pretty wonderful" (4 stars).

Final Destination adds 3D to the now well-trodden tale of teenagers who survive a terrible accident, only to have Death hunt them down in a variety of gruesome ways. The Times likes the 3D element: "a film that imbues something as innocuous as a pedicure with almost unbearable, butt-clenching tension can be improved only by four-inch nails, car tyres and juggernauts shooting out of the screen towards a cowering audience" (3 stars). The film "has the kind of bloodlust and goriness that makes all the difference to horror fans, with enough macabre jokes to keep you in your seat" according to the Evening Standard (2 stars), but Empire feels "the whole thing has the air of a join-the-dots cash-in" (2 stars).

The second installment of Mesrine is subtitled Public Enemy Number One, the same name as Michael Mann's recent John Dillinger drama. But "where the Johnny Depp vehicle sagged under the weight of its pin-striped costumes and its preening gravitas, this rambunctious and violent gangster drama more than sustains its lengthy running time" (Telegraph, 4 stars). The Evening Standard describes the film as a companion piece rather than a 'true' second part, adding that it "is repetitive and generic...but the set-pieces unfold with style and the kidnapping of a grouchy millionaire is a hoot" (3 stars) and the Guardian agrees it "hits the ground swaggering" (4 stars).

A man and a woman wash up on an English beach in Jetsam. There are so many twists and turns as we learn the nature of their relationship that the Independent thinks "algebra would be easier than piecing together this no-budget British espionage thriller" (2 stars). Speaking of the budget, the Times "takes my hat off to the writer/director Simon Welsford and his team for taking a budget so small that it would barely cover tea and biscuits on an average British film production and using it to craft a handsomely photographed and deviously complicated thriller" (3 stars) but ultimately, feels the Evening Standard, "it's all a bit silly" (2 stars).

In the Realm of the Senses (Ai No Corrida) has a revival at the BFI Southbank. A real-life tale of obsessive love and violence between a Japanese innkeeper and a former prostitute, the film is known for its sexual explicitness. The Times sighs that "the coolly wielded penetration shot has since become the weapon of choice for every bad-boy auteur on the make... But it has rarely been used with such decency and such clarity of purpose as in is this beguiling, masterful movie" (5 stars). The Guardian also lavishes praise on a film that "widens and deepens the sensual realm... this uncompromising film has not dated one iota" (5 stars).

Next week: indie romance 500 Days of Summer and aliens living in an Earth slum in District 9.