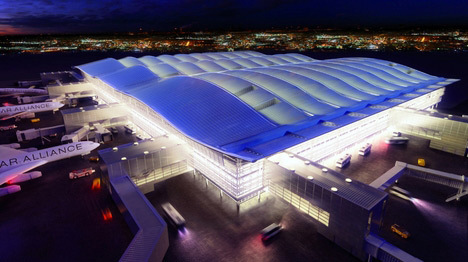 BAA have released pictures of Terminal East, the confusingly-named, £1 billion replacement for Heathrow Terminal 2, which will close at the year's end, and Terminal 1, which will shut up shop in 2019 when the new project is complete.

Designed by Norman Foster's firm, the building draws stylistically on the curved roof of the architect's airport terminals in Beijing and Hong Kong, rather than the boxy shape of Stansted. The roof is covered by energy panels, and north-facing glass walls will flood the space with natural light, with a 40% reduction on Terminal 2's energy use predicted.

Despite those impressive ecological savings, of course, Terminal East will berth skybound behemoths that consume vast quantities of fossil fuel, an irony not lost on John Stewart of the campaign group Hacan Clear Skies, who argues that the airport's extra capacity will mean more flights. But a BAA spokesperson cannily attempted to divorce the project from the ever-prickly third runway farrago, saying it was about creating more, and better, terminal capacity.

Terminal East, which will house airlines in the Star Network, will be built in two phases, with the first due to be completed in 2013. Those wishing for a nostalgic trip through Terminal 2, which was opened by the Queen in 1955, had better make it quick — it'll be demolished before the year is out.