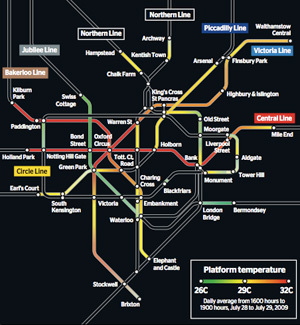 There are no new solutions to cooling the tube up TfL's sleeve this year but they have mapped the hottest spots Underground. Platform temperatures were measured on 28 July 2008, averaged over the year and transcribed onto a colour coded map where a pastoral shade of green indicates that Moorgate's pretty tolerable but steer clear of the whole of the Central Line as it's not the red one for no reason. And that's just the platforms; best not to think what happens to the temperature when you cram us into a carriage with a trainload of other sweaty travellers.

But you knew that because you're a Londoner, right? This exercise does nothing for the commuter other than confirm that travelling on the tube in summer is hot, sticky and unpleasant. There aren't many alternative cooler route options and buses don't help with the sun beating through the window on your head and the infernal heating burning a hole in your flipflop. The map serves as a reminder to TfL which stations are most in need of cooling once they come up with a better solution than giant fans. In the meantime, we're temporarily appeased cooing over Richard Long's satisfyingly ordered and prettily colour coded pocket tube map cover.