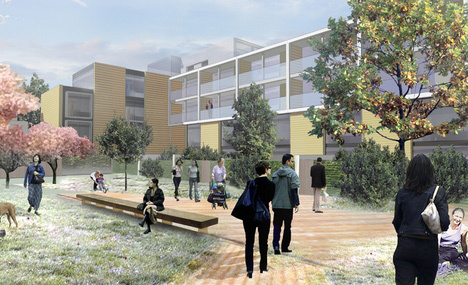 Plans have been released for some of the buildings slated to replace the 70s-era Heygate Estate in Camberwell, due for demolition.

The two on show are proposed for Stead Street and Royal Road, and combine low-rise and high-rise buildings set in an agreeable copse of wood. Certainly a more palatable living environment than the existing estate, though one wonders if this vision of urban beauty will be a hostage to fortune should things not turn out so well. The buildings are part of the Elephant & Castle regeneration, and form one of Europe's biggest housing projects, with sixteen sites and 1,000 homes upon completion. That completion date was initially set for this year, but things have gone awry, with Southwark Council blamed by many locals.

The designs are the second slice of good fortune for the Heygate in recent weeks, after a lapsed deal with Lend Lease was renewed. The estate's redevelopment has been threatening to stall, and though most of the residents have now been re-homed (though not always to their satisfaction), the demolition, planned to begin in September, has been delayed, though the council insists demolition will happen next year.

The blog Live From The Heygate has followed the development for years, and is an excellent resource, while this BBC documentary from earlier in the year has great archive footage of the estate's early years and gives an insight into the human stories that lie behind the faceless facades of concrete.