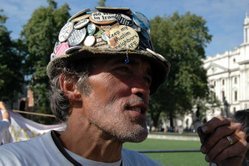 As we reported earlier, Parliament Square protestor Brian Haw has had his protest stripped down to just a couple of placards. Police turned up at 2:45am and removed most of his placards, and many of his possessions. Naturally, Londonist just had to go down to Westminster and ask Haw what was going on.

When we arrived, Haw being mobbed by photographers, cameramen and reporters, including a crew from an Iranian TV station. A group of supporters had already gathered, including one guy wearing a t-shirt sporting the slogan "Bliar", and shouting phrases like "House of Criminals" in the direction of the Palace of Westminster. Other supporters told us that the Police had taken the car battery Haw uses to charge his mobile, leaving one of the day's most in-demand men without any form of communication. Drivers of passing vehicles tooted their horns in either support or denounce him. One motorcyclist shouted "Good afternoon, Lord Haw Haw!" as he rode past.

When we finally fought our way through the reporters, Haw was indeed trying to sort out his phone. Supporters were offering him the use of theirs, one even going so far as to try and find a new car battery for the protester.

Haw was looking tired and sounding hoarse when we finally got to talk to him. He was shouting slogans, such as "Bring out your dead, M.P.s!" and "US! UK! Repent!"

He told us that the Police had arrived in the middle of the night "like the Nazi hordes in their jackboots", and taken all his placards, including two paintings by Banksy, apparently valued at £25,000 each. Brian then told us that one of them, a painting of a man holding a petrol pump to his head as if it were a gun, had been forced into a van by Police with no regard for its worth. Of course, Haw is not really that concerned with the monetary value (he told us that he misses all of his lost placards equally), but the sentimental value, and the message they send, is enormous to Brian and anti-Iraq protestors everywhere.

All this comes at a time when Haw's solicitor is appealing in writing against a High Court decision condemning his protest, which has gone on for nearly four years now. The Police Superintendant who condone last night's removal of Haw's possessions, has, according to Brian, exceeded his authority. "Only the Comissioner", he said, "has those powers." A number of Haw's supporters were also arrested this morning, but were released without charge this afternoon.

We asked Haw why the government is so determined to remove him. He pointed to one of his few remaining posters - a photo of a grossly disfigured Iraqi baby, wrapped in bandages, implying that the government did not like to see the plain truth of the invasion of Iraq so close to their own doorsteps. "Look what they do to our neighbours' babies", he said. "We want caring M.P.s, not men and women with hearts of stone." Now his display has been so grossly diminished, M.P.s aren't forced to look at it as their cars pull out of the gates of parliament.

We asked Brian how readers can support him. He gave us a link to the protest's website, and told people to "come to Parliament Square and be counted." One of his supporters also told us that they were encouraging as many people as possible to go there tomorrow morning with whistles, and other noise-making instruments as possible. Whether the Serious Organised Crime and Police Act, which means any unplanned protestors can be arrested withing 1 mile of Westminster, will deter them remains to be seen.

The best story Haw told us was that the Police removed the sandbags he used to keep his placards standing in the wind, claiming that someone could put a bomb in them. "I thought the point of sandbags was to dampen explosions" he said. Whichever Police Officer thought of that excuse was very creative indeed.

This removal of Brian Haw's possessions by the Police has left the man with barely a pot to piss in (actually, they left his pisspot, but he now doesn't have a discreet place to use it). Is the Haw era over? Or does he still have a chance to fight on? Your comments please.