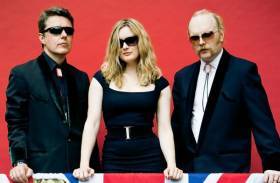 Black Box Recorder
This summer sees the Southbank Centre play host to a diverse range of gigs from acts new and old, with performances over the coming months from the likes of folk star Buffy Sainte-Marie, grunge heroes Greg Dulli and Mark Lanegan, to newer acts such as the Mercury nominated Laura Marling and Emmy The Great.

The Summer Gigs series kicks off on 18th July with United Underground taking over the Queen Elizabeth Hall for a festival of music and activism, with performances from Plan B, Get Cape. Wear Cape. Fly. & Bashy amongst many others.

July 20th sees one of the more unusual events of the season with The Heritage Orchestra Play The Music of The Clangers. The show is billed as the first Clangers musical show, and promises a mixture of music, narration, sound and sights to recreate childhood dreams of the Soup Dragon. The same day sees the iconic Marianne Faithfull play the Royal Festival Hall. With her recent “Easy Come, Easy Go” album seeing her collaborate with a host of stars including Nick Cave, Rufus Wainwright and Antony Hegarty, we may be in store for some surprise guests.

The recently reformed Black Box Recorder bring their icy cool indie pop to the Queen Elizabeth Hall on July 23rd where they can expect renewed interest following the success of Luke Haines hilarious Britpop memoir “Bad Vibes”. Another reunited act, the hugely influential post-punkers Magazine continue their run of shows since reforming at the start of the year with a show at the Royal Festival Hall on the 1st September.

With Gurrumul, Mary Gauthier, The National and Emiliana Torrini completing the line up, this season promises something that will appeal to everyone.