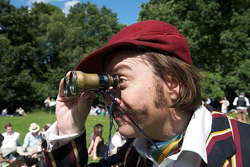 Felt a distinct lack of tweed in your life recently? Fret not, gentle readers, for the Chap Olympiad is almost upon us, bringing period costume, 'sporting' events and other genteel silliness to Bedford Square Gardens this Saturday.

Returning to its original home after last year's stint on Hampstead Heath, this event, hosted by Chap Magazine and new sponsors Bourne and Hollingsworth, will feature such demanding contests as Umbrella Jousting, Quill Throwing and the infamous Martini Knockout Relay. For those less inclined to perspire, there will be live music, entertainment and refreshments offered alongside the main events.

This 'celebration of athletic ineptitude and immaculate trouser creases' commences at 12pm, and unlike previous years will carry on into the night, featuring music, burlesque performances and, if everyone hasn't drunk enough already, cocktails. Sadly, the event is no longer free, but the £15 tickets can be purchased here or in person at Bourne and Hollingsworth's brilliant basement bar on Charlotte Street. Attendees are encouraged to dress in period costume, and Londonist is predicting a rush on moustache wax in the capital before the week is out: better get in there quickly, chaps!