One And Other Kicks Off With Plinth Invasion 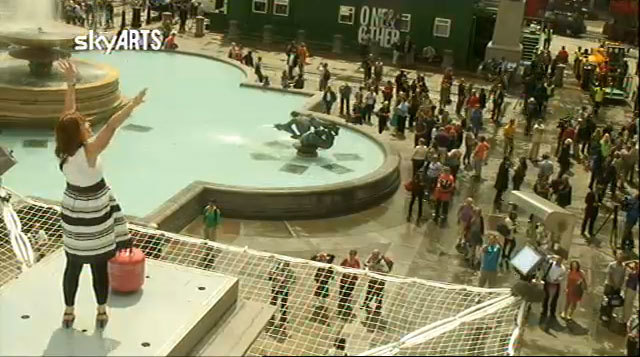 Antony Gormley's fourth plinth project officially began at 9 this morning, but the launch was hi-jacked by anti-smoking protestor Stuart Holmes shimmying up the plinth to wave a banner. Everyone took it in good humour though: Boris remarked "This is brilliant, this is what it's all about", while Gormley said he hoped Holmes would do the "gentlemanly thing" and get down when first plinther Rachel Wardell was winched into place by cherry picker (he did).

After the blazing weather of the past couple of weeks it was pretty much inevitable that the skies would open on this open air endeavour, but when we logged on to the live feed Jill Gatcum was very smiley as she released helium balloons into the sky above Trafalgar Square (take a look at who else is up there today). We think all may not be totally peachy with the live feed though: during the 12 o'clock changeover it suddenly switched back to what had been happening an hour before. Hopefully it was just teething troubles.

And don't forget we have two of the Londonist team on the plinth in August, and we're looking for suggestions for what they should do...