Maybe It's Because He Was A Londoner: Henry Allingham

By Londonist Last edited 149 months ago
Londonist Maybe It's Because He Was A Londoner: Henry Allingham 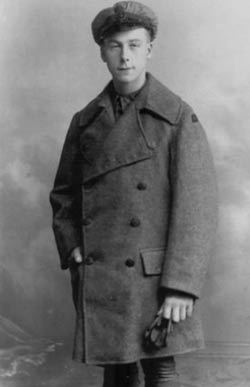 Henry Allingham in Royal Naval Air Service uniform during World War I, 1916
He may have spent his later days on the south coast - retiring to London By Sea, if you will - but Allingham, who recently became the world's oldest man at 113 and died yesterday, was a Londoner. Born in Clapton, East London in 1896, he spent his first years in the area, attending Gamuel Road School and Bessborough Road School in Walthamstow then Fourth Avenue School in Manor Park. In 1907 he moved to Clapham, where he went to London County Council High School. At the outbreak of the First World War he was living in lodgings in Bethnal Green, and rode his Triumph TT Motorbike to Pall Mall to enlist. Whilst he was initially refused he joined the Royal Navy Air Service the next year, serving in the Battle of Jutland and on the Western Front.

Allingham's London life time makes us twitch with historic envy: he watched W.G. Grace play cricket at Lords and remembered the 1908 Olympic Games coming to town, even noting that they had improved his P.E. lessons (dare we hope for such legacy this time around?) He even touched the criminal underbelly of the city, being visited by police investigating the robbery of a jewellery shop in Houndsditch by the notorious Sidney Street Anarchists.

We remember his visit to London in November for Remembrance Day celebrations and his selfless determination to do justice to his fallen comrades was an example to us all. In 2006, plans were laid down for the final First World War Veteran, which is now Somerset's Harry Patch, to be given a National Memorial Service at Westminster Abbey. Allingham remarked of his plan "I don't mind — as long as it's not me", and it is perhaps fitting that he got his wish.

Read the BBC Obituary for more.