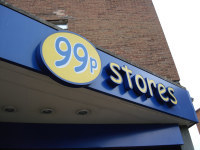 Lewisham's 99p store... they can handle the bargains without rioting / image author's own
This either says something about the state of the economy, or the state of certain parts of North London: the opening of a 99p store on Muswell Hill Broadway caused a stampede and other shopowners to shake their heads and tut.

According to the Muswell Hill Journal, a fight broke out between a security guard and a bunch of teenagers, and shoppers were locked in for 15 minutes until the police arrived. This just isn't the sort of thing people are used to seeing on those genteel streets, with its Maison Blanc, boutiques and extra virgin olive oil sellers. Some of the 99p store's neighbours are calling it "the thin end of the wedge. It won't be long before we are another Wood Green or Turnpike Lane", which made certain residents of Wood Green (understandably) spit with fury. We suspect in this case that 'keeping the tone of the area' may mean 'keeping the area trapped in a 50s dream that never actually existed', which apparently permits such uber-snobbery and hyper-ventilation over anything mildly different or interesting.