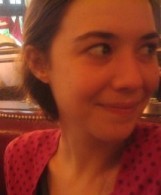 The name might not be familiar but the voice certainly will be to anyone with a copy of Damien Rice's O. Lisa Hannigan was a longtime collaborator with Rice and in lending her vocals to that album arguably stole the show.

She opens with a short cover of MJ’s ‘The Way You Make Me Feel’, which though unexpected - the band taking the stage one by one, beginning a rhythm on drums and percussion that sounds primal and earthy - yet feels unforced and somehow fits as an introduction to her deliciously hazy voice.

The band of acoustic guitar, upright bass and drums are augmented by a violinist and a multi-instrumentalist who hops between trumpet, xylophone and piano. Hannigan variously plays guitar, banjo and harmonium, the latter giving a rousing warmth and depth to songs like the twists and turns of ‘Venn Diagram’. Most prominently it features in the pretty, Regina Spektor-ish lullaby ‘I Don’t Know’, which receives the biggest cheer of the night. She also uses her voice like an additional instrument, trilling and cooing whispered melodies around off-kilter sea shanties and plucked folk follies.

With a strong basis in traditional Irish music, there’s a timelessness to these songs, and yet what strikes most is how contemporary they also feel. ‘Ocean and a Rock’ is keening and insistent as she sings to a love faraway, while ‘Teeth’ starts with a simple piano refrain and ends in a stormy swirl of violin. There’s also a still, serene take on Dylan’s ‘Just Like Tom Thumb's Blues’.

Ending on ‘Lille’, with Hannigan on guitar and the rest of the band hunched over xylophone, piano and percussion, it’s a beautiful, fragile farewell.