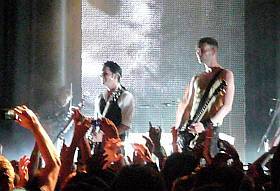 Last night saw moody glam rockers Placebo play Camden’s Roundhouse as part of the ongoing iTunes festival. Taking to the stage, Brian Molko has a wonderfully vampiric air to him, as they launch in to first song “Kitty Litter”. Much of tonight’s set centres heavily on their recently released sixth album, “Battle for the Sun”. The material is a lot more upbeat than anyone would have expected, following the recent departure of their long term drummer, and contains more than its fair share of stadium friendly belters. Possibly reinvigorated by their newest member, their new material is showing a greater diversity and they have developed a more textured, polished sound over the years.

Although over the years, their profile may have waned slightly, the band still has a devoted and passionate following, but they appeared to be in the minority tonight. Certainly there were a few hardened fans in the mosh pit, but sadly there seemed to be a general lack of interest in proceedings from large parts of the audience. Possibly this is a downside of the ticket lottery method adopted by iTunes, but hey, when a gig’s free it would be churlish to complain too much.

Whilst it was great to hear songs such as “The Bitter End” and “Infra-Red”, the lack of their early hits is a bold move (“Every You Every Me” is the only song performed from their first two classic albums). Given the lack of enthusiasm of the crowd, a burst of “Nancy Boy” or “Pure Morning” could have done wonders for the atmosphere, however it’s always great to see a band this far into their career continuing to look forward rather than being content to rest on past glories.