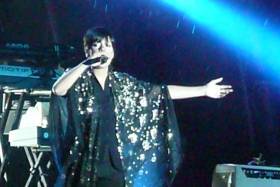 On Saturday night Lily Allen took the stage of one of the most perfect venues for a summer gig in London, the grand setting of Somerset House. Although, the weather did it’s best to ruin people’s spirits by raining throughout, if there’s one pop star who is guaranteed to bring the sunshine wherever they go, it’s Lily.

Opening with a lively rendition of “Everyone’s at it”, Lily looks as glamorous as ever as she takes to the stage. What follows is a lively set mixing material from her new album such as “22” (“a song about getting pissed”), with old favourites, not forgetting to throw in her popular cover of the Kaiser Chiefs “Oh My God”.

Things slow down about as she introduces the “jazzy acoustic part of the show” with “He Wasn’t There”, about her absent father, and “Littlest Things”. Her first hit “Smile”, spiced up with an drum & bass workout, is as vibrant as ever, and for a few minutes you barely notice the rain (sadly the countless umbrellas whacking you around the back of the head are much harder to ignore).

Lily gives a bold, confident performance and with only two albums under her belt, it’s astonishing how many classic pop gems she has produced. She's in an upbeat, chatty mood and with great ease whips up a fabulous party atmosphere for moist revellers both young and old. Bringing the evening to an end, Lily performs a rapturous version of Britney Spear’s “Womanizer” before getting the crowd to sing along to her anti-BNP anthem “Fuck You”. Finally, she asks the men to leave before launching into current hit “Not Fair”, her explicit tale of premature ejaculation. And then, like the unfortunate subject of the song, it’s all over far too soon.