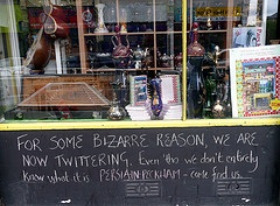 London is all a-twitter. Photo by Fin Fahey.
One happy winner

As you may recall, Kings Place and Network Rail held a Twitter haiku competition back in May. Tweets were judged by Yoko Ono and Jackie Kay and some of the best appeared on a screen at King's Cross. Simon Brake, a graphic designer, has been announced the winner with the following 'ku:

Beneath the morning sun

The city is painted gold

Brake, who has now gained free entry to the entirety of the Autumn Season of Words on Monday spoken word events at Kings Place, aimed to remind Londoners that our city is not just 'big and noisy' but also contains many 'natural and beautiful' elements which we often overlook.

Ono was impressed with the quality of tweets received and said that she 'was amazed that the level of understanding of the spirit of haiku was so high.' We'd like to give kudos to Mr. Brake for a wonderful tweeku...(haitweet?) about London and for demonstrating that Twitter can be used for more than simply letting your friends know that you need to take your cat to the vet.