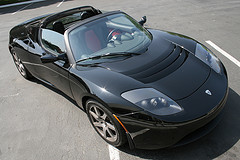 Image by coneee
Got a spare £87,000 burning a hole in your back pocket and a yearn to save the planet? Help is at hand: the Tesla Roadster, the electric car that's become a hot piece of roadgoing kit among America's glitterati, will soon be available in the UK in a right-hand drive version. Our anachronistic left-leaning road system means that, for now, anybody who wants to drive what Matt Damon drives has to plump for the left-hand version and be laughed at by pedestrians as they try and fail to maneuvre into a tricky parking gambit.

Last week saw the opening of Tesla's London showroom in Kensington, a judiciously chosen location where the car's cultural cache and chequebook-chewing properties will settle in nicely. Casting aside images of the whining, walking-speed only souped-up milk float that electric cars often conjure, the Roadster reaches 60mph in four seconds. If that isn't nippy enough, for £100,000 you can get the even-faster Sport model, with which the dealer will probably bung in a couple of go-faster stripes for free.

For those balking at those price tags, ebullient CEO Leon Musk has long argued that the early, expensive versions will subsidise the development of more cost-effective models in due course. The alternative, of course, is the zero emission cars that recently went on trial in London. They may not be as stylish, but they're probably less likely to leave you with that sinking feeling come AmEx bill day.